The Top 8 Meme Wars in history

A small list of wars that are meme-worthy to show how ridiculous wars start or can be. 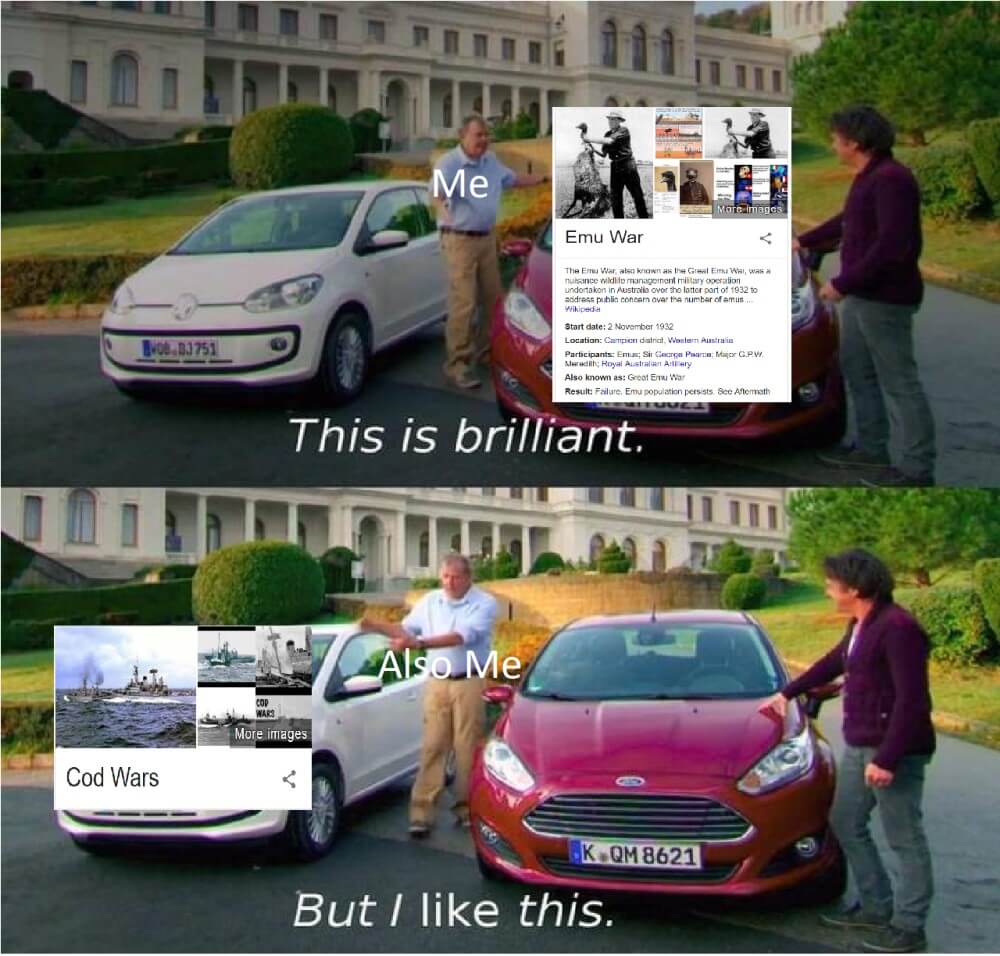 1. When some French Pastries ignited war 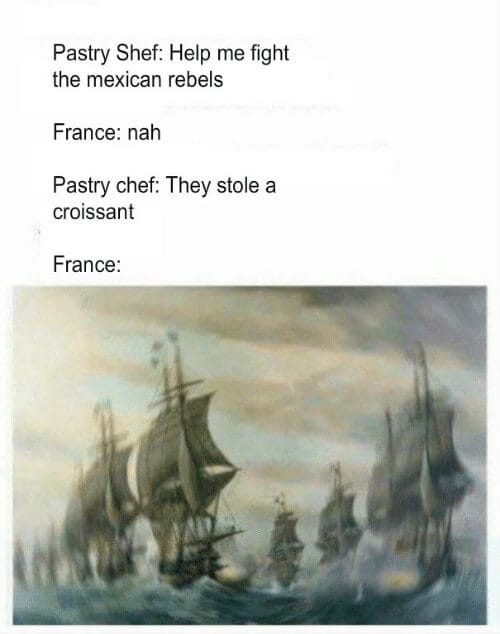 In 1832, a French dude's Pastry shop was destroyed by some Mexican rioters. With the Mexicans refusing to pay compensation, the French army sent a fleet blocking Mexico's East coast from trade. Eventually, Mexico agreed to pay the compensation but when this wasn't payed off, France invaded Mexico in 1861.

2. When a pig nearly caused war 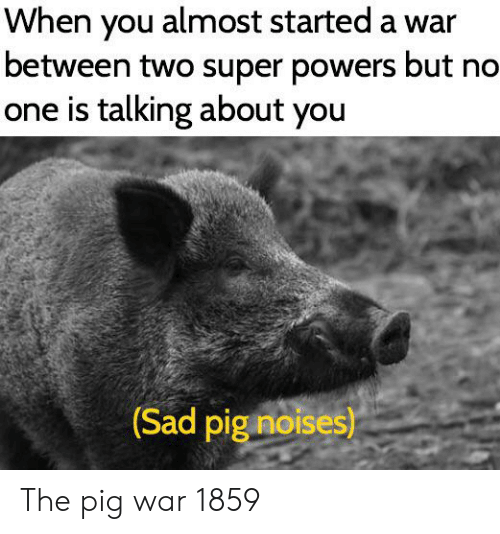 In 1859, both the UK and US claimed the San Juan islands(Between Oregon and Canada). What ignited the Pig War was the killing of a Pig by an American citizen where the Pig belonged to a British citizen who demanded for compensation but the freedom-loving American refused.

So the British threatened to arrest the American citizen. This resulted in 66 American soldiers guarding the island so in response, Britain sent 3 Warships and many Marines from Vancouver where eventually both sides just occupied the island together for a while.

3. When losing a Football match meant you choosen war 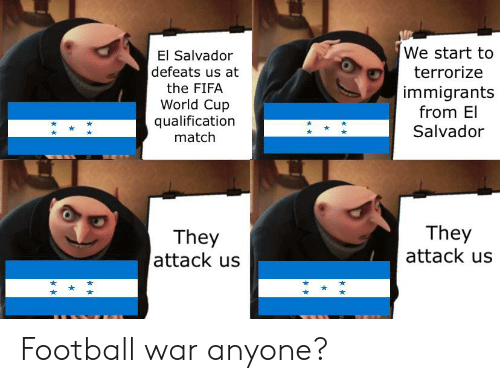 A war between Honduras and El Salvador that was ignited because El Salvador won against Honduras in the World Cup qualifying match in 1969 and Honduras deporting El Salvador immigrants. The war started with El Salvador invading Honduras with a final ceasefire commencing when Nicaragua supported Honduras.

In the end, El Salvador lost every match in the World cup and didn't make it pass the group stage.

4. War over some Fish and Chips 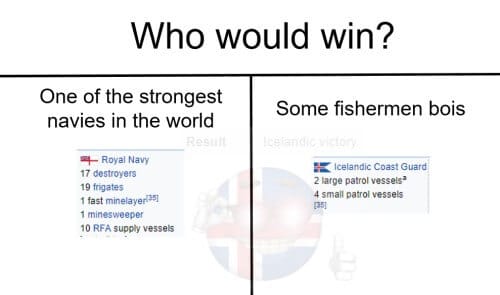 Between 1958-1976 the cod wars happened between Iceland and Britain. This was fought between the Icelandic Coast Guard and the Royal Navy and every time Iceland won. With Britain's popular dish Fish and Chips requiring Cod, Britain took more and more Cod from the North Atlantic.

The war started over fishing rights in the North Atlantic with the Icelandic Government increasing the range of its fishing rights three times hence three cod wars:

4. The war that lasted only 38 minutes 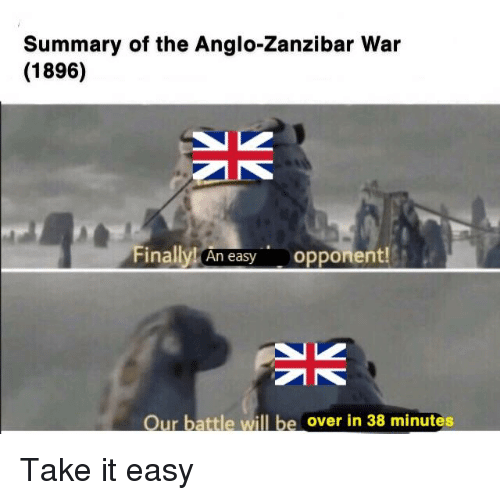 In 1896, war started between the British Empire and Zanzibar that lasted 38 minutes. Feeling imperialistic, Britain bombarded Zanzibar due to a rebellious Leader who at the end of the war, fleed to Germany but was then captured after WW1.

5. The stray doggo that caused war 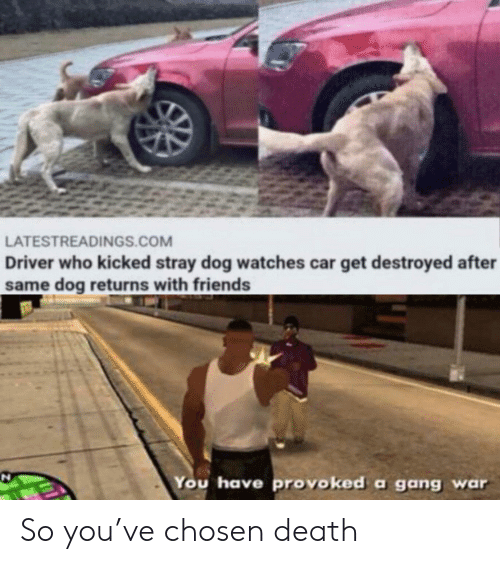 When Greece and Bulgaria went to war in 1925 due to a Greek soldier chasing a stray dog across the Greek-Bulgarian border where the Bulgarians shot the Greek soldier. With Bulgaria refusing to pay compensation, small scale fighting did occur until the League of Nations stopped the war.

7. When someone steals your bucket so you declare war 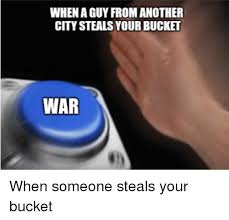 A war between two Italian city states in 1325, Bologna(Supported the Pope) and Modena(Supported the Holy Roman Empire). War started when a few soldiers from Modena went into Bologna, nicked their stuff and use the bucket to carry it away. So Bologna(32,000 troops) attacked Modena(7,000 troops) and naturally Bologna was utterly defeated with another bucket lost. 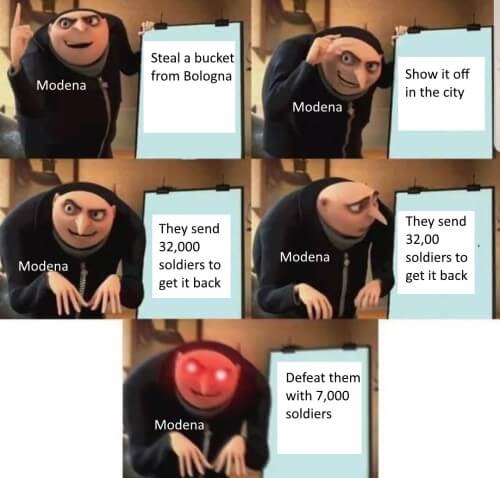 Summary of the war

8. Australia vs the Great Emu Empire 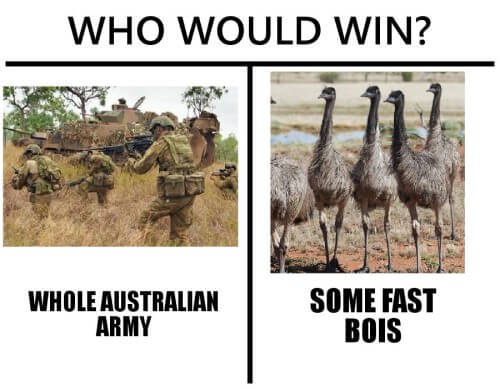 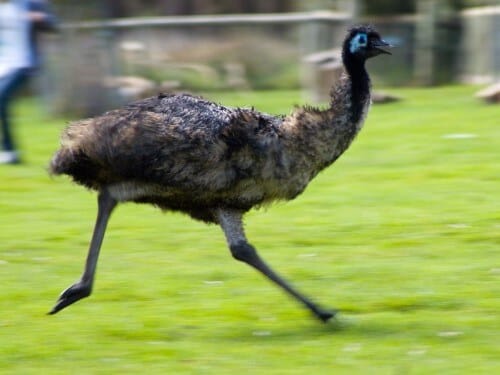 The Emu War was between the Australians and the Great Emu empire. Having been stripped of their land, tens of thousands of angry West Australian Emus went on a eating spree in wheat farms. Protected native species until 1922, they were officially reclassified as 'vermin'.

- 2nd November 1932, war was declared, part of the Seventh Battery of the Royal Australian Artillery set out with two Lewis machine guns and gunned down 50 emus in the battle of Campion. Casualties were minimised with the emus scattering themselves making a tactical retreat.

- Two days later, the Australians were able to conceal themselves from the Emu army and opened fire, however after 12 Emu soldiers had fallen, the guns jammed allowing the Emu army to make another tactical retreat.

- Seeing that the Emu army was very speedy, the Australians deployed mechanised units deploying the machine guns on the back of trucks. But once again, the Emus were just too fast allowing them to take minimal casualties and retreat.

- Upon this defeat, a ceasefire was enacted, it was found that each unit of Emus had a leader that warned his troops of enemies making it very hard to encircle the emus.

The end of the war

After the ceasefire, the Australians hired mercenaries which had little effect. What ended the war was the Australians top-secret wonder weapon, "the fence" which repulsed every invasion attempt made by the Great Emu Empire. Nowadays you can see Emus in prisoner of war camps called "Zoos".